It is possible that you have seen a rather peculiar woman walking around the streets of Hamilton over the last four years. If you have, I hope you gave a wave…because I am she.

During my wanderings of every street in Hamilton I have stumbled across some intriguing houses.

Some were grand and others were more humble.

Some were surrounded by flowers, gardens and trees with other homes feeling the sting of  neglect.

I love the variety of architecture where I live. The downtown area is even more varied.  It makes my walks so much more interesting.

The ones that I find most intriguing are abandoned houses. I have had the opportunity to go inside some of the most abandoned of houses with my photographer friend Hank. He loves to  explore the secrets that these relics of the past contain and I have tagged along a couple of times.

The back yard of a home off of Upper James.  I will confess that I was itching to go into this one before it is gone.

Out in the country.  A brambly yard. Locked up tight. 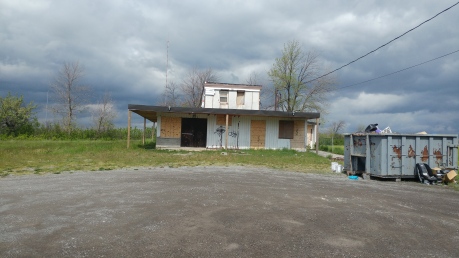 Near the edge of the escarpment. Vandals got to this one.

Too late. This one on my street was coming down.

I wish that I had been allowed to go inside to have a peek at what it looked like but we do not always get that chance. As Hank says, “take only pictures – leave only footprints.”