I try to be observant when I am out walking especially when I am in a previously unexplored area. I was out for a walk the other day and came across a mystery.
One that stopped me in my tracks.
I might say it left me speechless but anyone who knows me – knows that speechlessness does not often happen to me.
This is what I saw in the ditch.

Now, this puzzled me. What an odd formation of ice. How did it get that shape? What were those odd pointy marks on the top right of the ice?

I had to walk a bit further to finally figure out that the culvert had a build up of ice and, with a bit of a thaw, the ice escaped the culvert and slid downstream in the ditch with the sole purpose of perplexing me. 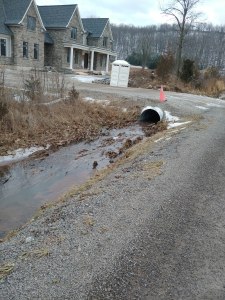 The second mystery was equally perplexing. I wish I had taken a picture but I didn’t and since a picture is worth a thousand words we will see how many I will need to explain this to you.

After a significant snowfall, I noticed that there were strips of snow stuck to a long fence. 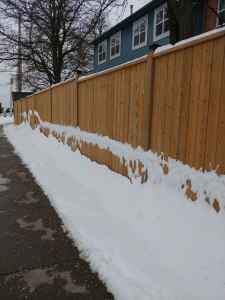 This perplexed me. How in the heck did that snow get there?

Why was it so much higher than the rest of the snow all around it? Were kids throwing snowballs at the fence in an amazingly accurate manner to create a solid strip of snow?  I pictured hordes of children lining up just to stick the snow to the fence just to mystify me. Why would the bottom and tops halves of the fence have no snow and the middle had snow solidly affixed to it? I confess that this had me wondering for days before I found out the answer.

When my hubby and I were going past the fence, I expressed my state of perplexity to my practical, commonsensical husband. He told me that the stripes were the result of large snowblowers blowing the snow at the fence.

Another mystery solved. It should not have confused me as much and as long as it did but I confess I am not always the brightest bulb in the chandelier.

One thought on “Confessions of a Street Walker – part 11”