It is possible that you have seen a rather peculiar woman walking around the streets of Hamilton over the last four years. If you have, I hope you gave a wave…because I am she.

When I am out walking I do not always pay attention to the street names. But sometimes I do. Especially when they are the same name as my children. I am not so good at selfies but thought it was worth trying. 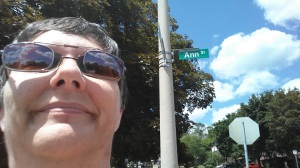 It is not spelled with an ‘E’ but this little street in Dundas is one on which my daughter named Anne actually lived on.

Shirley Street on the east mountain

I also found a Laura Court 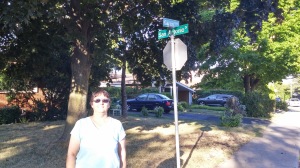 And there is a Henry Street downtown.

And an Andrew Court on the central mountain.

I confess that I would like to start looking for grandchildren now. I have 10 grandchildren and have found a few already. I will keep on looking.