My brother Jeff and I have kept a New Years Resolution to watch a movie together once a month since January 2019. We alternate choices and it has been fun.

The movie this month was Jeff’s pick and he chose Rocky. Last month’s choice was mine and I chose Chariots of Fire so I suppose this could be a ‘sports’ theme or a ‘Best Picture Oscar’ theme or a ‘men in shorts’ theme. We will see if we can make the theme last for the entire year. I suppose the next choice will, more or less, cement the theme with which we will select movies with – or not. It depends if Jeff will play along. 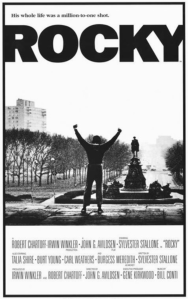 I can’t say I remember if I had ever seen Rocky. I was certainly aware of some of the scenes as they are fairly iconic but I couldn’t remember the ending. Will Rocky win or won’t he?

Bodyguard: Did ya get the license number?
Rocky: Of what?
Bodyguard: The truck that run over your face.
==

Sylvester Stallone wrote the screenplay and had to pitch the script more than 150 times before someone showed interest. During that time, he was so broke that he had to sleep at the bus terminal. Finally, there was an offer to buy the script but they didn’t want Stallone to star in the movie. Stallone refused the $300,000 offer because he believed he was the best choice to play Rocky Balboa. He was eventually allowed to star in his own film which went on to earn over $200 million at the box office. Rocky also captured a Best Picture Oscar in 1976 and spawned 7 sequels. The rest, as they say, is history.